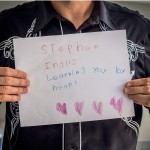 Have you ever heard of Hawaiian Slack Key guitar? Me neither, but Stephen Inglis has been playing it for years and his talents are featured on his latest collection, which came out in June.

So I was interested in not just listening to the album but learning a little bit more about the difference between the old standard guitar and Hawaiian Slack Key. Long story short, it began when the guitar was introduced to the islands in the 19th century and involves loosening the strings to create different chord patterns and a unique technique of playing, rather than the standard blues-based progression.

The genre seems to have a devoted fan base, though. Later this month Inglis will be playing Tokyo at a festival featuring the guitar form, but he also has a date this fall in Texas at a regional folk gathering. Stephen already has a brief tour set for October out west.

Nor will he won’t be out of place there. Inglis borrowed from other forms of music to put together his latest release. For example, the mandolin on Cold Sunday gives this song a bluegrass feel with its prominence.

Yet despite the different techniques and the number of instruments involved, I found the album suffered a little bit from a lack of memorable songs. Usually in a review most of the songs will stick out at me for something like Cold Sunday did, but in this case there were only a few. I liked the lyrical storytelling of Maria Luisa, Our Younger Days, and the title track, and the opening song Blind With Haste was a good introduction.

On the other hand, the one track I really didn’t like was the duet Don’t Postpone Joy. The voices didn’t seem to mesh well, so it perhaps should have just employed one of the two.

Obviously Inglis comes from a unique musical direction, but there is only so much you can do with acoustic music in a popular sense. There’s not the breakout capability here like you had with Bob Marley for reggae or Bob Dylan electrifying folk (and being booed for it by the purists.) “Learning You By Heart” is a nice enough album, but may not be the vehicle for broader appeal.

Then again, any musician appreciates gaining fans – even just one at a time. When I can, I always invite you to listen for yourself.

When we on the east coast think of tropical music, we gravitate to reggae or Caribbean songs, but you may just dig this island sound of a different sort.