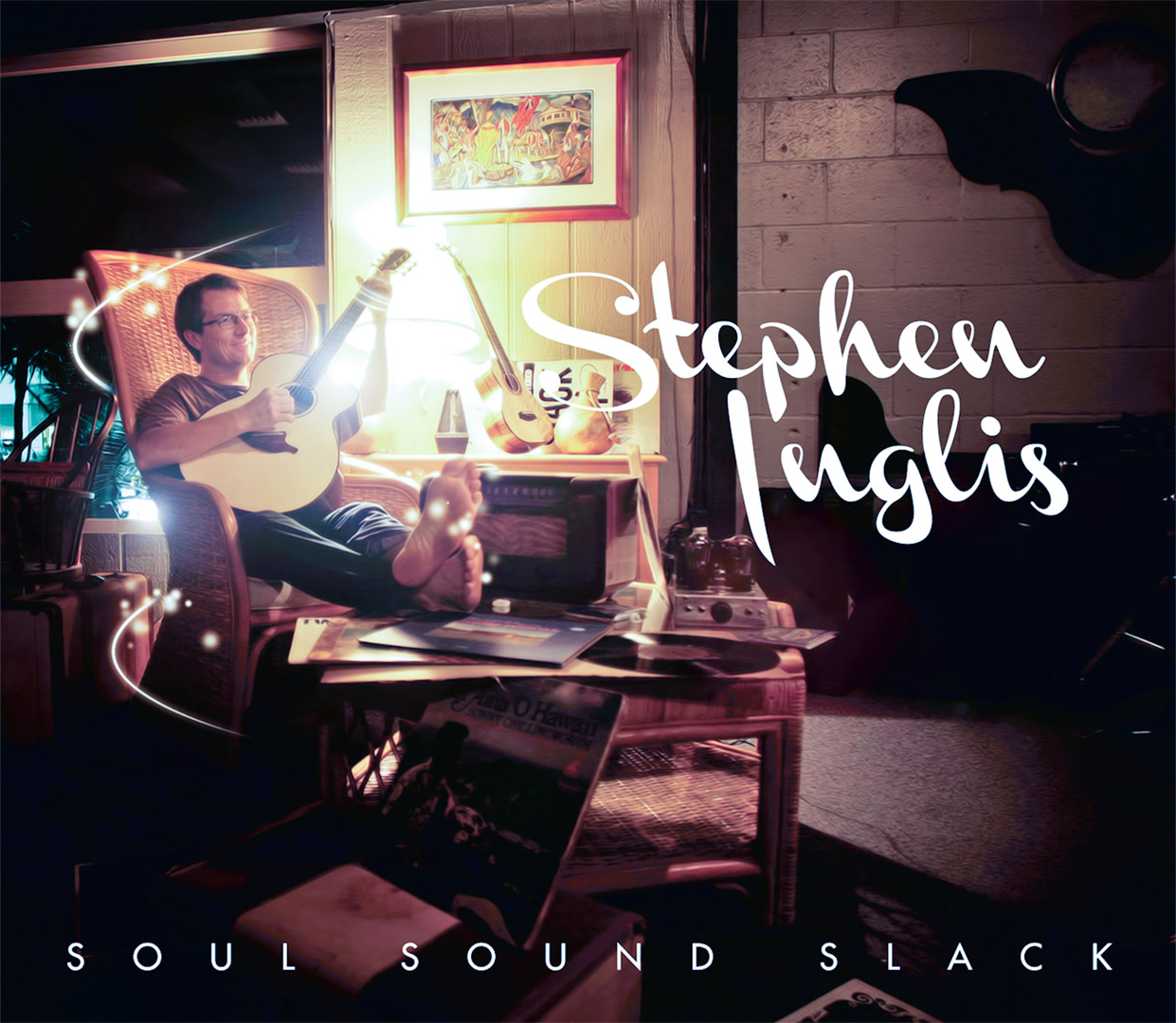 This album is dedicated to all who perpetuate the art of Hawaiian Slack Key Guitar. E Ola Mau Ke Kī Hōʻalu!

I have had the good fortune to work with Shawn Livingston Moseley for the past six years. In the summer of 2007, Shawn approached me to be the first artist on the brand new ʻAumakua Records. With this beautiful symbol of guidance and protection for the artist and the art itself at the core, I was truly honored and humbled to be at the helm of the maiden voyage.
Including that first release, Mahina O Waiaʻale- AAR001, I have been blessed with five ʻAumakua albums.

I was again lucky enough to set sail with the first recording at Soulsound Studio in 2010, Slackinʻ on Dylan. Since then, some amazing musical journeys and award winning records were captured on the second floor of this unassuming Kāneʻohe Warehouse. All who have worked at soulsound can attest to the mana felt between these walls.

With this sixth release, Soulsound Slack, my first all instrumental solo Slack Key album, I bid a fond farewell to the first physical incarnation of Soulsound. All though we will soon be moving to a new space, we know the spirit will follow us to the next Soulsound.

Lock Lynch, the new chief engineer at Soulsound shines with a set of skills that belie his youthful 25 years on the planet. I was blown away by his focus, grace and professionalism and wicked sense of humor on this first record we did together. Mahalo Lock.

The prodigiously talented singer/songwriter/ guitarist/engineer/photographer and old friend Kelli Heath-Cruz brings her magic to the table for this project: For this I am eternally grateful.

With his many talents and hard work, Brandon Apeles has done amazing things for the local music scene and the ʻAumakua/Soulsound team in a few short years. Iʻm honored to now be working with Brandon as my manager.

Much mahalo also goes out to the incredible Zack Manzano for lending his awesome talents to this album.

My deepest gratitude and mahalo to Shawn, Lock, Kelli, Brandon and Zach for their vision, generosity and unwavering commitment to the music. IMUA!
Stephen Inglis  June 2013

Mahalo Piha!
Ozzie Kotani for passing down the Kī Hōʻalu of Sonny Chillingworth. Sonnyʻs ʻohana, Auntie Jackie and Uncle Ray for your warm Molokaʻi aloha, Makana for your generous kōkua and vinyl.  Dennis Kamakahi, The Lau ʻOhana and all my slack key brothers onboard our traveling circus. Karen Fischer at Pasifika Artists. Patrick Landeza for keeping the bay area my home away from home. Marlowe Holt for the incredible work on my  website and photos.Ty Shiroma at Guitar Works for keeping my babies in good health. My whole ʻohana for their never ending love and support. My amazing instrument sponsors, Lowden Guitars, Kanileʻa ʻUkulele, Curt Mangan Strings, L.R. Baggs and G7th Capos: You help take the music to another level.

1. Waioha G Taro Patch D-G-D-G-B-D
I wrote thIs a few nights before going into the studio. Waioha means joy taken from the word oha or ohaoha described in the Pukuʻi Elbert Hawaiian Dictionary- 1. Spreading, as vines; thriving: to grow lush. 2. Affection, love, greeting: to greet, show joyous affection or friendship, joy. This paints a beautiful image of Kī Hōʻalu itself, and it is my song of gratitude for all slack key has given me.

Translation and story courtesy of Huapala.org.

Thank you dear friend
For gracious hospitality to visitors
Here is your unforgettable, beloved
Leimakani, a lei so fragrant

The story is told
Moanike`ala, beautifully verdant
We call, you answer
Jim of the highlands, your name-song

Source: Songs of Helen Desha Beamer, Copyright 1953 Harriett Beamer Magoon – Composed for James Kimo Henderson, “James of the Highlands” a poetic reference to Scotland, his birthplace. Moanike`ala was the name of the Henderson home in Pi`ihonua, above Hilo. Leimakani was Kimo Henderson’s wife.

3. Slack Key Number 1 G Taro Patch
A signature piece by slack key legend Sonny Chillingworth. As with all of Sonnyʻs songs I perform, I learned this from Ozzie. For this recording I added a quick bridge in the middle that has become a part of my arrangement.

4. Guitarlele Adirondack Slack G Taro patch sounded a 4th up in the key of C
This is a version of my older song redwood slack key showcasing my Kanileʻa Guitarlele. Adirondack Spruce was the top wood taking center stage on this entire album.

5. Pālolo in the moonlight. Guitar- Taro patch Guitarlele-A-D-G-C-E-A
An instrumental version of the ballad from my 2005 album, Driftwood. Written on a cold full moon winter night, while living in Berkeley, CA.

6.Soulsound Slack G Taro patch
The title track: A tribute to the wonderful recording studio (and all the wonderful people in itʻs sphere) thatʻs been home to many powerful musical moments in a few short years.

7. Beautiful Kahana Drop C
I fell in love with this mele when I first heard it on the classic Sunday Mānoa album, Crack Seed. Another ballad arrangement from Ozzie Kotani. Oz always encouraged me and all his students to use his lessons as a guideline, but then step out and find our own voice. In that spirit, I added a bridge section, before returning to the last verse. From Huapala.org :

Chorus:
This is the home of the lady
Of the loving heart of India
A flower lovingly fondled
By the Mâlualua ki`i wai breeze

Chorus:
Like the large leaved maile in the calm
Proud in the presence of the rain clouds
It inspires an expression of love
For the flower queen of Kahana

Source: King’s Hawaiian Melodies – Written for Mary E. Foster and her beautiful country home, Kalahikiola, on the windward side of O`ahu at Kahana. Verse 1, stanza 2, “the loving heart of India” refers to Mary Foster’s Bahai faith and her monetary gifts to build a Bahai temple in India. Many of her charitable acts in Hawai`i were quietly given and unknown, but the lasting gift was her Honolulu home, now part of the famous Foster Botanical Gardens. Foster Gardens is a 20-acre oasis in downtown Honolulu. Mary (part-Hawaiian) and her ship owner husband Thomas purchased the property from Dr. William Hillebrand, a German botanist, in 1880. Mrs. Foster purchased additional acreage and Princess Lili`uokalani added to the gardens by purchasing the adjoining property from the estate of Queen Kalama, wife of Kamehameha III. Before her death, Lili`uokalani, who kept a cottage on the grounds, transferred title to the Civic Federation of Honolulu, to be used as a park. Mrs. Foster also bequeathed her garden to the city of Honolulu in 1930. Both properties were combined and became the Foster Botanical Gardens.Translated by Mary Pukui Copyright 1915, 1942, 1963 by Charles E. King

8. Maui Serenade G Taropatch
A brilliant adaptation by Ozzieof 2 guitars arranged for one.
If you have not already, check out the beautifully restored vintage version for The History of Hawaiian Slack Key Guitar on Cord International/Hanaola Records.

MAUI SERENADE – Abraham Kalauli Konanui (49th State #HRC-104-A – 78 rpm)
This medley is a collection of five songs, each played for two verses: two traditional
slack key melodies, Aloha Ia No O Maui (by Alice Johnson), Salomila (traditional) and
Papalina Lahi Lahi (traditional or Alice Johnson and Johnny Noble). This medley is
played with the same musicians and tuning as Hawaiian Melody. The profound
improvisation, interplay and rapport are stunning. Note the very strongly defined vamps
at the end of each verse, which unifies these five pieces, and also how the players manage
to keep the rhythm going with a bass note on the first and third beats of each measure,
and an alternating third string G note on the second and fourth beats. In the last measure
there is a little car-horn guitar effect with two chromatic notes played together, which
slack key guitarist Ledward Kaapana often puts to use today.
These two Abraham Konanui tracks are two of the most powerful pieces ever recorded in
any genre. The great audio restoration work done by John Golden, John Polito, and
Howard Johnston enables us to more fully hear what these two fantastic guitarists are playing.

9. Moe ʻUhane/Hoʻomalu Slack Key G Taropatch
A medley of two Sonny Chillingworth originals. Both feature his use of syncopated bass and hammer on/pull offs. Playing these tunes always relaxes me and turns down the stress.

10. Keiki Slack Key G Taropatch sounded on guitarlele 4th up in the key of C
I really enjoyed recording this classic by the late great slack key master Raymond Kane. I think the high tuned slack Guitarlele nicely captures the spirit of the frolicking keiki Uncle Raymond evoked on his original version.

11. Hula Blues G Taropatch
The Johnny Noble tune from the 20ʻs, done in Sonny style, but given a bit of hillbilly twang.

12. Moana Chimes/Paʻahana/Hilo March/Maikaʻi Kauaʻi G Taropatch
Adding on the classic Sonny Medley with stops on the Big Island and Kauaʻi

13. Hulu O Kaʻauhelemoa Guitar -Drop C Guiatrlele A-D-G-C-E-A
A complete improvisation. I sat behind the mic with no pre-conceptions and hit record. Next I played along on the Guiatrlele. When listening back, I tried to let the title come to me. I thought of Kaʻau crater way in the back of my home of Pālolo valley. “Hulu O Kaʻauhelemoa is a moss said to grow only in Pālolo Valley , Honolulu. Named for Kaʻauhelemoa, a legendary cock defeated in battle by a hen. She pulled out his feathers, which fell and became this moss. It is used in leis” from Pukuʻi and Elbertʻs Hawaiian dictionary.