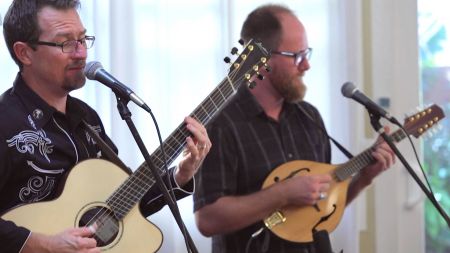 Stephen Inglis is a grammy-nominated Hawaiian slack-key guitarist, which is a style that involves adding slack to some of the guitar strings until the open strings create a single chord (usually G-Major). For those that can’t relate to that because they don’t follow Hawaiian slack-key guitar awards (a questionable life choice), he’s also opened for Sublime and he once formed a band with legendary Grateful Dead drummer Bill Kreutzmann.

Inglis reps the Hawaiian musical tradition in several capacities, but his singer-songwriter persona is probably the most accessible. In June, the guitarist released his fourth album of this ilk, Learning You By Heart, and it is especially Dead-like.

Throughout Learning You By Heart, Inglis explores quasi-country themes with lattices of fingerpicked instruments, always prioritizing the atmosphere above all else. And like the Dead, the atmosphere he conjures is indefatigably balmy. Basslines bounce, banjos, keys and electric guitars wander in and out of sight, and all the while Inglis’s delicate fingerpicks persist on that old slack-key.

Through a thin Hawaiian sheen, Inglis sings songs with titles like “Troubador”, “Wildfire” and “Our Younger Days.” His voice draws from a Townes Van Zandt twang, a Jerry Garcia laze and a pop-driven, James Taylor resolution, allowing him to evoke timeworn moods from a bygone era. In an especially wistful “Our Younger Days”, Inglis sings of the past and ends his remembering with a familiar croon: “sitting alone, with this sad song.”

Any why is it so familiar? Because it represents the proverbial good ol’ days, when life was simpler, ideas were less nuanced and people were less aware of, well, everything. It’s a feeling that has persevered for decades, that yesterday was simpler than today, because it actually was. We romanticize such a past because it’s devoid of all the new complications we’re experiencing right now, and whenever we don’t want to deal them, we can simply play some old music and forget for awhile.

In Learning You By Heart, Inglis captures that timeless feeling of returning home. As he sings in one of the record’s final tracks: “Find your way back home, baby it’s been too long. Honey you’re my muse, and without you, I’ve got no song.”

Time may not be the muse Inglis is referencing, but she is certainly an underlying inspiration in his music. And we are thankful that she’s an especially enduring muse, because sometimes it’s nice to turn off the now and be nostalgic for that time when we were sitting alone with a sad song.