Learning You By Heart Review in No Depression 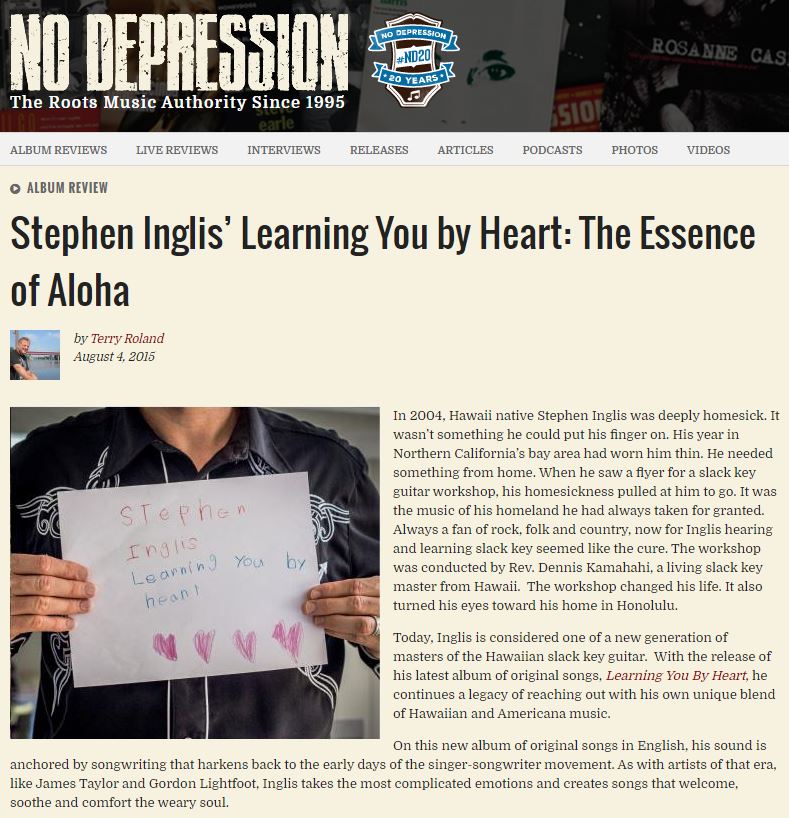 Stephen Inglis’ Learning You by Heart-The Essence of Aloha

In 2004, Hawaiian native, Stephen Inglis was deeply homesick. It wasn’t something he could put his finger on. His year in Northern California’s bay area had worn him thin. He needed something from home. When he saw a flyer for a slack key guitar workshop, his homesickness pulled at him to go. It was the music of his homeland he had always taken for granted. Always a fan of rock, folk and country, now for Inglis hearing and learning slack key seemed like the cure. The workshop was conducted by Rev. Dennis Kamahahi, a living slack key master from Hawai’i. The workshop changed his life. It also turned his eyes toward his home in Honolulu.

Today, Stephen Inglis is considered one of a new generation of masters of the Hawaiian slack key guitar. With the release of his latest album of original songs, Learning You By Heart, he continues a legacy of reaching out with his own unique blend of Hawaiian and Americana music.

On this new album of original songs in English, his sound is anchored by songwriting that harkens back to the early days of the singer-songwriter movement. As with artists of that era, like James Taylor and Gordon Lightfoot, Inglis takes the most complicated emotions and creates songs that welcome, soothe and comfort the weary soul.

Inglis’ artistry on his instrument successfully provides a diverse quilt of slack key influenced songs alongside folk and country styles creating something new for Americana music: Hawaiiana, if you will. Why not? Haven’t we been hearing a lot lately about Canadaicana?
It is a fine line Inglis walks on this new album between the traditional and the modern. But his balance is found in the center of his songs. At the center is what Hawaiians call “Aloha.” To mainlanders it means ‘welcome,’ but to the Hawaiian it is a way of life, which offers an attitude in action of warmth, compassion and mercy. This is the core of the songs of Stephen Inglis. In a phrase, he creates Aloha through Americana.

It is no accident that Inglis hangs his hat with the slack key culture of his island home. One of the overlooked treasures of American roots music is found in the slack key and ukulele musicians of the Hawaiian Islands. However, the best of them, including George Kahumoku, Brother Noland and Ledward Kaapana are content with their native life at home. We go to them for our vacations. Who can blame them? They live in a paradise thriving in the wilderness, on farms and in musical residencies at resorts surrounded by the Pacific Ocean.
But, Stephen Inglis’ story is different. With series of award-winning and critically acclaimed albums, he has been slowly creating a bridge that reaches across the Pacific Rim to the Americana and roots music culture of the mainland. He invites us to listen and welcomes us with his aloha.

His story is part of the epic journey of the culture’s resurrection since the days of the Hawaiian Renaissance of the 1970’s. But, his awareness of the importance of the music of his home and his place in its history began with his first strum of the unique tuning provided him by Rev. Dennis Kamakahi in 2004.

By 2006 Inglis returned to Honolulu where he fell into sitting in with musicians at the plentiful slack key festivals of the Islands. He found himself back in the musical fold of Kamakahi. This began years of a relationship which consisted of ‘talking story’ and jamming between the two musicians. But, they soon discovered they had a mutual past, which bound them together not only in music, but in spirit.

In 2011, Inglis went into the studio to record a solo album. When Kamakahi was invited to play in the sessions, he heard Inglis sing his song, “Na Pua O Kalaupapa” which translated means “The Flower of Kalaupapa.” Kalaupapa is the famous colony established on an isolated peninsula on the island of Molokai in 1873. Its ‘colonies’ were for what was then called, Leprosy Disease-today it is known as Hansen’s disease.
Through the song, the two artists discovered they were linked through the dramatic events that took place in 1978 at Hale Mohalu-a long-standing aftercare hospital for Hansen’s patience in Pearl City near Honolulu. When the government attempted to move the patients to another facility, a stand-off ensued. It lasted for five years. Attempts were made to evict the patients while citizens began to unite in support of the patient’s right to remain at Hale Mohalu. The government shut down their electricity and withheld medication. Citizens rallied in protest and to help the patients of Hansen’s disease.

Led by Hansen’s patient Bernard Punaikai’a, who was an activist, poet and songwriter, the events at hospital became a unifying symbol of the return to Hawaiian culture, which had been suppressed for 90 years. It was during this period the native language returned along with the music and dance that were the Hawaiians’ tie to their ancient history.

Hearing Stephen Inglis sing his song about Kalaupapa brought back the years of the struggle for Dennis Kamakahi. He was a member of the highly influential band, Sons of Hawaii, who became the musical spokesmen for the Hawaiian Renaissance. While Kamakahi was performing, Inglis was a young child spending weekends at the hospital with his parents helping to care for the patients. . He saw the movement first hand. He saw the discrimination. He also saw the compassion his parents held for the patients of Hansen’s Disease. While today it is known that Leprosy is not as highly contagious as once believed, apparently, compassion is. This compassion grew in Inglis and Kamakahi from those days at the hospital. The result became some of the finest music ever produced by artists of the Hawaiian Islands.

Inglis and Kamakahi’s historical and musical bond became the collaborative album Waimaka Helelei (“Falling Tears”). Each song tells of something of the life of the remote colony on Kalaupapa, isolated on the Molokai coast surrounded by 3,000 foot cliffs. It is an album of compassion and redemption. It was given the Na Hoku Hanohano award for Slack Key Album of the Year from the Hawaiian Academy of Recording Arts. The album is now on permanent display in The Smithsonian Institute in Washington D.C.

Unfortunately, Reverend Dennis Kamakahi died of lung cancer in 2014.
Inglis, throughout his slack key career, has engaged in fearless projects with more consideration for art than for commercial prospects. Probably the best example of this is his 2010 release, Slackin’ on Dylan, where he turns his guitar skills and vocal talent to a unique re-invention of classic Bob Dylan songs including “Forever Young” “Tangled Up in Blue” and “Boots of Spanish Leather.” Placing Dylan’s music in a Hawaiian context demonstrates the strength of the songwriter and the tradition of slack key guitar in terms of universality and adaptability. As it turned out, Slackin’ on Dylan is a match made in Hawai’i. It is a groundbreaking album for both the world of slack key guitar and the ever-growing world of Dylan song interpretation.

Today his current release of Learning You by Heart, Inglis has extended his artistry into roots influenced songs which echo with the influence of Dylan, American blues and folk music. It is his first release of all English original songs. Hopefully it will not be his last. With timeless themes like “Blind with Haste” and “Don’t Postpone Joy” which speak to living a full life, along with personal treasures like the title song, “Our Younger Days,” and “Troubadour,” the album is consistent, well-produced and positive in its worldview.

However, most of all, like all of Inglis’ albums, the musical essence of ‘aloha’ is captured in song on Learning You By Heart. It is an experience nearly as refreshing as the winds off the shores of Maui.